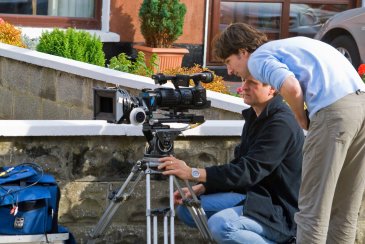 With the technology currently available to filmmakers, making a film has never been easier or more accessible. Even in the current economic climate there are gifted and enthusiastic people defying the odds to commit their vision to screen. This one-to-one coaching is suitable for directors or filmmakers seeking to improve their technique and refine their skills, or interested beginners who wish to explore the craft of directing.

You will be mentored by Graham Cantwell. Graham is an IFTA nominated, multi-award winning writer and director with two decades of experience in the film industry. His films have won awards at many top tier festivals at home and abroad, including The Galway Film Fleadh, the Audi Dublin International Film Festival, the Foyle Film Festival, the Santa Fe Film Festival, the Iris Prize Festival and many more. His debut feature film Anton was nominated for three Irish Film and Television Academy Awards. The Callback Queen, his second feature, received two IFTA nominations, screened in cinemas nationally and was hosted by George RR Martin for a week long run at his Jean Cocteau cinema in New Mexico. Graham has taught directing and acting at many educational institutions in Ireland including: The Samuel Beckett Centre, Trinity College Dublin, The Irish Film Academy, Filmbase, Dun Laoghaire Institute of Art, Design and Technology, The Attic Studio, The Gaiety School of Acting and Griffith College Dublin. He has also given masterclasses at several film festivals throughout Ireland, Europe and the United States.

As this is an individual tutorial we can tailor the session to your specific needs so please contact us to discuss what it is you would like to achieve as a result of coaching. Whether you have a shoot to prepare for, want to develop your technical skills, or simply would like an introduction to the craft of directing actors, we can help you. We can work around your schedule to arrange your session at a time that is convenient for you.

Our pricing is graded with options for one hour, two hour or three hour consultations. Email us for our rates card or to discuss your first session.